While we often do not appreciate creepy crawlers in our home and capturing bugs as a form of entertainment, one thing we can appreciate are insects on the big screen.

Bugs have been the stars of shows when it comes to movies and documentaries. Whether they are informational, drama or comedy films – bugs seem to do a pretty good job at keeping us entertained. Even Disney World has dedicated a space in their Animal Kingdom park for an attraction called “It’s Tough to be a Bug!”

A Bugs Life (1998) G
All is well for a group of bugs and their colony until a group of grasshoppers become greedy with their food supply. This movie follows the journey of a misfit ant trying to save his colony through inventions while all others believe he cannot do it. An animated comedy meant for all ages that helps us understand some of the struggles bugs face!

Spiderman (2002) PG-13
Peter Parker takes a field trip to a genetics lab with his class and ends up getting bit by a spider. The next morning, his life changes as he learns his new powers and strengths. Peter uses his abilities for a good cause around his community but shortly learns about an evil villain he would soon have to bring to justice. This action filled movie took a futuristic look at bugs, science and humans. A true classic! 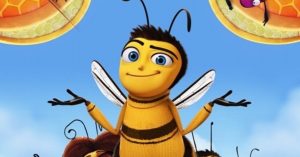 Bee Movie (2007) PG
This animated comedy film follows the life of a bee, Barry B. Benson, who just graduated from college and realizes once he chooses his job, there is no going back. As he flies around New York City, he brakes the one sacred rule: never talk to a human. With a major turn of events, Barry is forced to save flowers for pollination. This movie illustrates how vital bees are to our society while portraying good morals to the audience.

Ant-Man (2015) PG-13
Ant-Man, much like Spiderman, took a futuristic and superhero approach when it comes to bugs. While the main character, Scott, discovers a suit which allows him to shrink and heighten his strength. The creator of the suit then seeks him out to help him save the shrinking technology from being in the wrong hands. This action filled comedy movie thrills us with the idea of working with ants to help save the world – it truly is a brilliant angle on ants!

Life in the Undergrowth – Documentary (2005)
If you’re looking for something jaw-dropping yet beautiful, watch the five-part series of Life in the Undergrowth. This documentary explores the miniature universe, in detail, that we don’t normally get to see. Learn about the evolution of insects and how they go about their day-to-day lives without us noticing. A range of insects are presented in this film from spiders to termites to flies. A great educational documentary for anyone to watch.

Movies and documentaries based around insects will continue to be produced as time goes on. We often forget how amazing they can be portrayed on the big screen. But we also forget their evolution and way of life. We hope you get the opportunity to watch these films and appreciate the mini-universe of insects!

Newer: What Can You Expect After A Hurricane?

Older: Cockroaches: Why They Are So Hard to Control